National Forest in the Amazon. 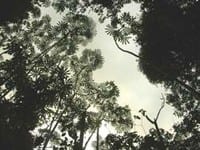 Veríssimo, A.; Cochrane, M. A. & Souza Jr., C. 2002.
The Brazil´s government is implementing a policy based on sustainable forest production within an expanded system of National Forests (Flonas). By 2010, 50 million hectares of new Flonas will be created. The scale of this initiative is equivalent to the 1908 establishment of the United States National Forest system and is unprecedented in the tropics. Strategically planned expansion of the Flonas system may also contribute to biodiversity conservation and economic stability in the Amazon frontier. The mosaic of conservation areas, combining Flonas with full protected areas and indigenous reserves will easily put Brazil among the foremost conservers of natural resources in the World.