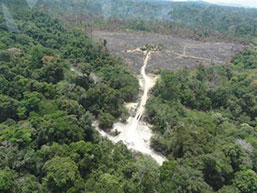 (Reuters) – Preliminary data released Tuesday by Brazil’s space agency suggests Amazon deforestation spiked by more than a third during the past year, reversing a steady decline in destruction of the world’s largest rainforest.

If substantiated by follow-up data typically compiled by the end of the year, the increase would confirm fears by scientists and environmental activists who warn that farming, mining and Amazon infrastructure projects, coupled with changes to Brazil’s long-standing environmental policies, are reversing progress made against deforestation.

Last year, Amazon deforestation was shown to be at a record low.

The likely increase in deforestation has prompted concerns that Brazil may have let its guard down and provided an opening for loggers, ranchers and others eager to develop parts of a forest that is seven times the size of France.

Brazil’s space agency, which tracks destruction of the rainforest using monthly satellite imagery, detected almost 2,766 square kilometers (1,067 square miles) of forest clearings from August 2012 through July 2013. The total area, more than twice the size of the city of Los Angeles, is 35 percent higher than the area cleared in the previous year, the agency said.

The measurement year ends in July, when visibility is best, because clouds often gather in the region much of the rest of the year, making satellite imagery difficult to collect.

A more complete tally for the period is compiled, using complementary satellite data and on-the-ground research provided by other government researchers. The additional data helps determine if clearings are the result of deliberate destruction or natural degradation caused by drought, wildfires or other factors.

Data compiled by Imazon, a private research institute, also points to an increase in deforestation over the past year. The group, the only other source of regular Amazon data considered reliable by many scientists, recently said destruction over the past year may have almost doubled.
Reuters – Tue Sep 10, 2013.