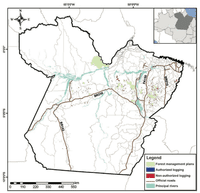 In this bulletin, we assess the logging situation in the State of Pará between the years 2007 and 2008.
Monteiro, A., Cardoso, D., Veríssimo, A., & Souza Jr., C. (2009). Forest Management Transparency Report – State of Pará (2007 – 2008) (p. 10). Belém: Imazon.
In this first bulletin Transparency in Forest Management in Pará we assess the situation of timber harvesting in the State for 2007 and 2008. The assessment consisted of estimating the area of timber harvested with and without a forest management authorization and in verifying the consistency of the Timber Harvesting Authorizations (Autorizações de Exploração Florestal – AUTEF), of timber credits issued by the Pará State Environmental Secretariat (Sema) and of the quality of performance of forest management in the areas authorized for logging. This was done using information from the Sema forest control systems, Simlam (Integrated System for Environmental Licensing and Monitoring – Sistema Integrado de Licenciamento e Monitoramento Ambiental) and Sisflora (System for Marketing and Transporting Forest Products – Sistema de Comercialização e Transporte de Produtos Florestais), and analysis of satellite images generated by SIMEX, the System for Monitoring Timber Harvesting (Sistema de Monitoramento da Exploração Madeireira) created by Imazon (Box 1) as part of the Pact for Legal and Sustainable Timber (Box 2).
According to Simlam, forest production in Pará during 2007 and 2008 was approximate- ly 5.5 million cubic meters of logwood and 9.5 million cubic tons of forest residues. Ninety-nine percent of that production originated from management of native forest and only 1% came from management of planted forests.
Our analysis of satellite images demonstrates that approximately 418 thousand hectares of forests were logged during the same period. Of that total, the great majority (89%), or 372,354 hectares, was not authorized by Sema, as opposed to only 11% authorized (45,354 hectares). Of the total area used for logging activity without authorization, the majority (73%) occurred in areas that were private, vacant or disputed1; 14% occurred in protected areas (Conservation Units and Indigenous Lands) and 13% in land reform settlements.
As for consistency in the AUTEFs, our analysis of information obtained from the two Sema forest control systems showed that the majority (63%) were legal, while 37% presented some type of inconsistency, notably: (i) management plan authorized for an already deforested area; (ii) man- agement plan authorized for an area where logging had already occurred; (iii) management plan with an area larger that the total area authorized; and iv) credit for a greater quantity of timber sold than what had been authorized.
Finally, among the management plans evaluated in the satellite images, 44% were well carried out, and thus of good quality2; 41% were of average quality and 15% were classified as poor quality.
Download the file here