Our heritage endangered: why amazon’s conservation units are at risk 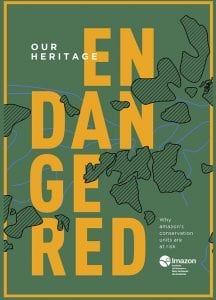 From the micro to the macro level, the Amazon rainforest is grand. It houses the greatest biodiversity on Earth. Its plants contain substances used to fight diseases, such as Uncaria tomentosa, which is used against inflammatory processes. They are also used in the cosmetic industry, like the copaíba balm, a scent fixative. Apart from that, the Amazon offers countless other services to the environment. It acts upon rain formation, which directly supports agriculture and hydroelectric power generation.
It assists in regulating the climate of the whole South America, preventing extreme climate events like hurricane formation. It stocks carbon directly mitigating global warming. It contains cultural wealth as well; with a population of 343 thousand indigenous people, 3 it houses most of Brazilian
tribes and supplies local communities with resources. All that diversity attracts tourists. Nature is the second most common reason why foreign tourists come to Brazil, according to the Ministry of Tourism.
All this grandeur must be well cared for. Brazil’s immense natural heritage can benefit the whole country, if administered sensibly. One of the strategies to organize the sustainable use of the region
includes the creation and administration of a network of Conservation Units (CUs). CUs have several objectives: some establish restrictions to their use, in order to preserve their natural resources. Others allow the sustainable extraction of wood. They have in common the objective of avoiding the plundering of the region and ensuring that it can provide its benefits to people today and in the future. However, the Conservation Units are under attack. Some cattle farmers, gold miners, lumberers and land speculators, either out of misinformation or out of greed, invade and damage these areas – which are public property – for their own profit. One of the main findings of this study is that deforestation rates are
still high inside the Conservation Units. In 2017, the deforestation rate was twice that of 2012, which was the lowest in the period under study. Another worrying trend is the apparent decrease in the efficiency of their protection. In ten years, the deforestation rate inside the Conservations Units has almost doubled in participation in the total deforestation in the Amazon. It went from 7%, in 2008, to 13%, in 2017. Data released in 2018 by the Instituto Nacional de Pesquisas Espaciais – INPE (National Institute of Spatial Research) show that the increase in deforestation in the region has
started again between 2017 and 2018, reaching its highest rate in the last 10 years. The good news is that society is vigilant. It grows increasingly aware that the fraudulent appropriation of public areas results in loss for all and, therefore, wants to know more. This report gathers some of the most recent information from the Amazon Instituto of People and the Environment on the subject. It’s a contribution so that society can monitor and better understand the health of the largest rainforest in the world, which belongs to all of us.