The Amazon and the Millennium Development Goals 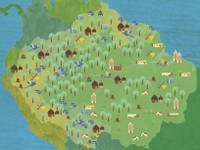 The Amazon Regional Articulation (ARA), established in 2007, is a network of organizations and persons who work in the Amazon countries and have the objective of combating the factors that contribute towards deforestation in the Amazon. It is made up of a regional platform and executive secretariats in Bolivia, Brazil, Colombia, Ecuador, Peru and Venezuela, which cooperate independently and according to the particularities of each country. ARA seeks to contribute effectively towards reducing deforestation and sustainable use of biodiversity through three priority guidelines: forest transparency, green economy and valuing culture. Its mission is to facilitate the interconnection between the various actors and provide for an exchange of experiences in order to construct a new vision and new development models for the Amazon region.
Among the themes prioritized by ARA is the initiative of carrying out an evaluation of the socioeconomic and environmental situation throughout the Amazon region using the framework proposed by the Millennium Development Goals. In “The Amazon and the Millennium Development Goals” project we analyzed the indicators proposed by the United Nations (UN) and others that are relevant for the region. The Millennium Development Goals (MDG) involves socia’l indicators that reflect the quality of life for populations and environmental indicators that reveal the situation of ecosystems and their natural resources.
The member organizations of ARA in each country work collaboratively through a participatory process and under the same protocol for collecting and analyzing data, as well as for preparing national publications. The national publications look more in depth at MDG issues in the Amazon region of Bolivia (Reyes and Herbas, 2011), Brazil (Celentano et al., 2010), Colombia (Hernández et al., 2011) Ecuador (Ponce et al., 2011), Peru (Dancé, 2011) and Venezuela(BellorínandQuispe,2011).Those publications were utilized as the basis for drafting this document, which integrates and summarizes from all of the Amazon countries.2 Additionally, we have included a section on indigenous peoples.
One essential finding is that there is a profound lack of information regarding the reality of the different “Amazons,” a situation that impedes the promotion of policies and regional initiatives for the conservation and integration of programs in search of sustainable development. The MDG have the merit of establishing the bases for a broader discussion regarding the costs and benefits of the development process. This document intends to provide a building basis for decision-making in favor of the Amazon and its inhabitants.
Download the file here