The challenges to more sustainable ranching in the Amazon 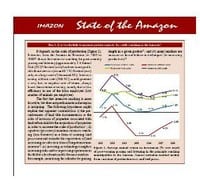 Barreto, P. & Silva, D. 2009
Pastures for ranching occupy 75% of deforested areas in the Amazon and most deforestation has been illegal. As a result, this sector has been the target of enforcement activities and environmental campaigns. In 2009, IBAMA (The Brazilian Environmental Agency) and the Federal Public Prosecution Service began legal action against ranches and meat-packing plants in Pará to avoid the marketing of cattle obtained from illegally deforested areas. In this The State of the Amazon we describe the environmental pressures on cattle ranching, the future scenarios with regard to those pressures and the means for making the sector more sustainable in the region, including: land title regularization; environmental enforcement and actions against clandestine slaughter; support for forest conservation; and increased productivity in already deforested areas.
Baixe aqui o arquivo