The risks and the principles for landholding regularization in the Amazon 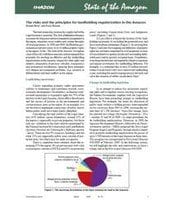 Brito, B & Barreto, P. Imazon. 2009
The land ownership situation for roughly half of the Legal Amazon is uncertain. This lack of definition threatens economic development and environmental management in the region, stimulates social conflict and violates the rights of local populations. In 2008 and 2009, the Brazilian government passed new norms to try to define property rights in the region.
In this The State of the Amazon, we explain some of the risks with these measures and recommend four principles for reaching an effective and fair landholding regularization in the Amazon: respect for other rights and interests, elimination of perverse subsidies, transparency and institutional coordination. Ignoring those principles will deepen environmental problems (e.g. increase in deforestation) and land conflicts in the region.
Baixe aqui o arquivo

The Changing Rates and Patterns of Deforestation and Land Use in Brazilian Amazônia.Monitoring deforestation in Protected Areas in Pará