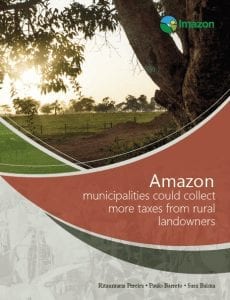 In this study we show that some mayors partially took advantage of the new rules and increased the collection of ITR in the Legal Amazon, following the trend of the rest of Brazil. The amount collected in the region jumped from BRL 17 million in 2000 to BRL 240 million in 2017. The increase occurred mainly after the municipalities were able to participate in the tax control. By 2018, however, only 38% of city governments in the region had signed control agreements. The sixty-two percent which did not subscribe missed the possibility of increasing revenues and investing in their various sectors in need, such as education, health and infrastructure. Mato Grosso, where 93% of the municipalities, holding 95% of the taxable area, are affiliated, was the state with the most significant increase in tax collection. There, the value was multiplied by nine between 2007 (before the agreement) and 2017 (after the agreement). The main measure observed in that  state to increase revenue was to update the Bare Land Value (VTN). To this end, some municipalities have hired consultants to assist in updating the VTN based on the land market price.
Despite this increase in ITR collection in the Amazon, we found that the collection is still below its potential. We estimate that the value could be four (BRL 986 million) to six times higher (BRL 1.5 billion) than the one collected in 2017 simply considering that the municipalities used the land market price as the basis for VTN, which is one of the bases of the ITR calculation. In our analysis we estimate that the average VTN declared by farmers corresponded to only 10.5% of the average land market value in 762 municipalities. In the agreed municipalities, the declared values corresponded, on average, to only 14% of the market, and in the ones without an agreement, to 6%.
Another factor that hinders a higher rate of ITR collection by municipalities is the fact that the federal government does not update the land productivity index, which is also used for tax calculation – The current index is based on 1985 data. Thus, even low productive areas reach the minimum degree of utilization. This way they pay lower rates. For example, according to the index currently used, a property in the Amazon is considered productive if it has 0.5 head of cattle per hectare, which is below the region average of 1.9 head per hectare (Silva & Barreto, 2014; IBGE, 2018). Intense pressure from rural groups against the ITR is the main factor that influences Brazilian presidents to not update productivity rates for the purposes of tax rate determination and mayors to not properly update their municipalities’ VTN.
In 2009, then-President Lula promised to update productivity rates (obsolete since 1980) but was blocked by pressure from rural groups. No other president even mentioned updating the index. Our study also revealed that rural groups pressure mayors from member municipalities to set VTN ceilings below market price, even when consultants are hired to research market values. One consultant stated that he does not propose an adjustment equal to market value because it would be a “shot in the foot”, that is, his work would be discontinued because of pressure from rural groups.
In addition to the lobby by rural groups to not increase the ITR, the lack of better coordination between city halls and the RFB for data sharing, capacity building and establishment of procedures also undermines tax collection. Finally, ITR is a minor tax on RFB’s total revenue and little attention is given to it. Measures to improve revenue are sporadic and there has been little investment to empower municipalities. Judging irregularities is lengthy and penalties are rarely enforced or insufficient – for example, mayors are not condemned personally for not updating land values, which represents an informal tax waiver.
For ITR collection to be effective and promote rural development, technical and policy improvements will be required, including:
Transparency and filters to encourage the use of market land values. In order to curb undeclared land use value, it is necessary to promote the collection and sharing of market data. In addition to requiring municipalities to collect data, as has already been done, RFB could collect or acquire market data as a reference to check the values provided by municipalities and reported by taxpayers. The São Paulo State Department of Agriculture collects and disseminates bare land values for ITR purposes and has already identified that some municipalities in the state have given in to pressure from rural groups to reduce values.
Focus control on municipalities with signs of low productivity. The high rate of underutilized land, such as degraded pastures, can be used to prioritize enforcement over ITR. Among the champions of degraded pasture areas are registered municipalities. In addition to the large stock of misused land, some of these municipalities continue to be champions of deforestation, such as Altamira and São Félix do Xingu in Pará. Therefore, enforcement in these regions could help both to improve the use of already opened land and prevent further deforestation.
Use property maps for ITR control. The taxable area can be estimated by cross- linking satellite imagery of the areas with the property maps that are available in the Rural Environmental Registry (CAR). Currently, the legislation only requires the tax reporter to enter the registration number. RFB and municipalities could access CAR maps to intersect them with land use maps. The crossing of property maps (such as CAR) and other jurisdictions (land reform settlements, protected areas, indigenous lands) would also serve to assess the causes of the declining declared area that has been occurring. Although the CAR number is already being required in the Rural Land Tax Declaration (DITR), the RFB has not yet reached agreements with CAR managers to cross information.
Update the productivity index to establish the degree of land use. Incra, which is directly responsible for updating the index, could priori- tize the updating of the indexes of the cattle, be- cause it is the use that occupies the largest area and one of the most inefficient. To do so, it could use existing data. However, updating the index.