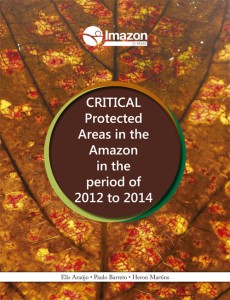 Araújo, E., Barreto, P., & Martins, H. 2015. Critical Protected Areas in the Amazon in the period of 2012 to 2014. (p. 20) Belém: Imazon.
Conservation Units (UCs) have generally been one of the most effective measures against deforestation in the Amazon, and thus for reducing greenhouse gas (GHG) emissions. However, some of them are in critical situation of deforestation. Generally, those areas present irregular occupations and are in the regions of influence of major infrastructure projects, such as highways and hydroelectric dams, and are vulnerable because of inefficient enforcement. Aware of these problems, enforcement agencies such as the Federal Audit Court (TCU) and the Federal Public Prosecution Service (MPF) have demanded that UCs be implemented throughout Brazil, especially in the Amazon.
In order to contribute to such initiative, we present the 50 UCs which are critical areas of deforestation that need to be priorities for implementation actions, especially, of land regularization – in other words, the removal of irregular occupants and the compensation and resettlement of those that have the right to it. Those critical areas concentrate 96% of the deforestation that occurred in Amazon UCs during the period of August 2012 to July 2014. Seven of the top ten most deforested areas and which account for 81% of the deforestation in the critical areas are suffering from a low level of implementation according to data from the TCU (in other words, they lack management plans, management council, and sufficient human and financial resources).
The success of UCs against deforestation and as a basis for local development (tourism, sustainable timber harvesting) depends upon investments. The government needs to prepare a longterm plan that takes into account the necessary resources and priority actions. The initial focus of those actions should be the critical areas of deforestation that are under the most pressure (near projects that attract migrants such as hydroelectric dams and paving roads) and are vulnerable because of irregular occupations. To guarantee the integrity of those areas, we recommend: punishment for all crimes associated with illegal deforestation, which will lead to confiscation of assets and stiffer penalties; removal of non-traditional occupants from UCs where their presence is not allowed; and taking back public lands outside UCs for the necessary resettlements.
Download
Download the e-book version
23 de June de 2015