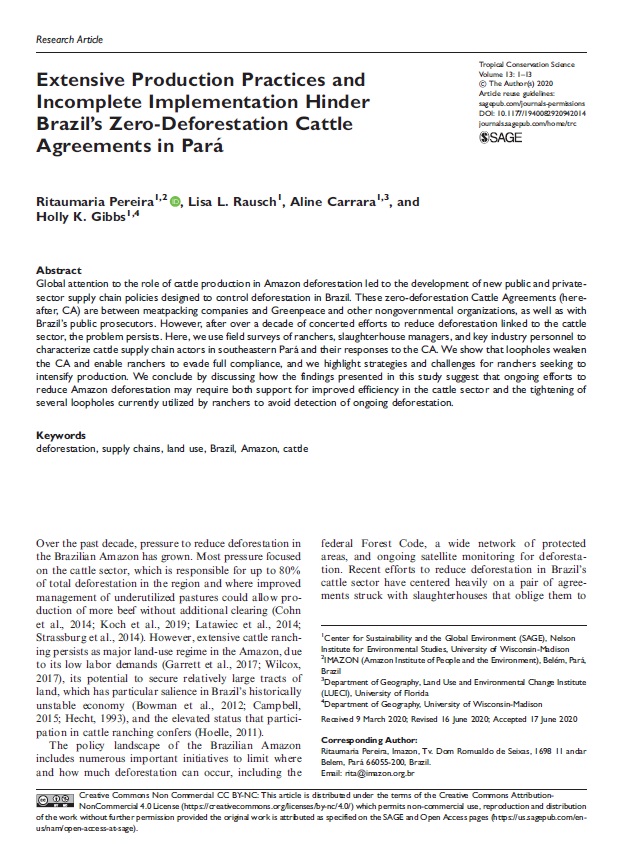 Global attention to the role of cattle production in Amazon deforestation led to the development of new public and private-sector supply chain policies designed to control deforestation in Brazil. These zero-deforestation Cattle Agreements (hereafter, CA) are between meatpacking companies and Greenpeace and other nongovernmental organizations, as well as with Brazil’s public prosecutors. However, after over a decade of concerted efforts to reduce deforestation linked to the cattle sector, the problem persists. Here, we use field surveys of ranchers, slaughterhouse managers, and key industry personnel to characterize cattle supply chain actors in southeastern Pará and their responses to the CA. We show that loopholes weaken the CA and enable ranchers to evade full compliance, and we highlight strategies and challenges for ranchers seeking to intensify production. We conclude by discussing how the findings presented in this study suggest that ongoing efforts to reduce Amazon deforestation may require both support for improved efficiency in the cattle sector and the tightening of several loopholes currently utilized by ranchers to avoid detection of ongoing deforestation.

Over the past decade, pressure to reduce deforestation in the Brazilian Amazon has grown. Most pressure focused on the cattle sector, which is responsible for up to 80% of total deforestation in the region and where improved management of underutilized pastures could allow production of more beef without additional clearing (Cohn et al., 2014; Koch et al., 2019; Latawiec et al., 2014; Strassburg et al., 2014). However, extensive cattle ranching persists as major land-use regime in the Amazon, due to its low labor demands (Garrett et al., 2017; Wilcox, 2017), its potential to secure relatively large tracts of land, which has particular salience in Brazil’s historically unstable economy (Bowman et al., 2012; Campbell, 2015; Hecht, 1993), and the elevated status that participation in cattle ranching confers (Hoelle, 2011).

The policy landscape of the Brazilian Amazon includes numerous important initiatives to limit where and how much deforestation can occur, including the federal Forest Code, a wide network of protected areas, and ongoing satellite monitoring for deforestation. Recent efforts to reduce deforestation in Brazil’s cattle sector have centered heavily on a pair of agreements struck with slaughterhouses that oblige them to identify and block supplying ranches that have deforestation or other forms of noncompliance such as embargoes, forced labor, or that lack registered property boundaries in the nationwide environmental cadaster. These agreements include the Amazon-wide G4 Zero-Deforestation Agreement, which was signed in October 2009 following a Greenpeace report, Slaughtering the Amazon (Greenpeace, 2009) that linked clearing in the Brazilian Amazon to international supply chains for leather, tallow, and beef (Barreto et al., 2017; Gibbs et al., 2016). Roughly concurrently, the Federal Public Prosecutor’s Office (Ministério Público Federal [MPF]) in Pará state began to pressure ranchers and slaughterhouses to commit to no longer trading cattle from areas with new deforestation by signing Terms of Adjustment of Conduct (TAC) agreements. TACs now cover slaughterhouses in all Amazonian states, though most responses remain concentrated in Pará and Mato Grosso where the commitments began (Barreto et al., 2017). Although there are some differences in the scopes and details of the two agreements, their timing and goals align such that we refer to them collectively as the Cattle Agreements (CA).

Both agreements operate based on the premise that the threat of exclusion from the best markets will incentivize better behavior. However, a decade after they were first initiated, implementation of the CA remains incomplete, and questions remain about how to truly reduce the role of deforestation in Brazil’s cattle sector. For example, some slaughterhouses have not yet signed onto the CA or have only recently signed or begun monitoring (Amaral et al., n.d.; Barreto et al., 2017). Furthermore, ongoing leakage and cattle laundering among suppliers to slaughterhouses with CA has further limited the impact of the CA on forest protections (Alix-Garcia & Gibbs, 2017). The delay in extending monitoring to indirect suppliers to slaughterhouses (e.g., those ranches that raise young cattle prior to their arrival at a fattening farm just before slaughter) has facilitated laundering because ranchers can easily register their cattle on a clean property despite raising them on properties with deforestation (Alix-Garcia & Gibbs, 2017). Finally, slaughterhouses also continued to buy directly from properties with deforestation in some circumstances, despite monitoring (Klinger et al., 2018), especially when they competed with nearby nonmonitoring slaughterhouses for cattle (Barreto et al., 2017; Gibbs et al., in press). Meanwhile, broadly accessible alternatives to clearing new areas to increase cattle production have not yet emerged (Garrett et al., 2017; Merry & Soares-Filho, 2017; Rueda et al., 2003).

Considering the land-use habits of producers subject to conservation policies such as the CA can reveal additional pathways for improving compliance and maximizing forest cover on ranches. Research in various fields, including Rural Development Studies, Agricultural Studies, Environmental Studies, Agricultural Economics, Sociology, and Geography, has identified factors that affect how compliance with environmental policies and standards become part of decisions about land use. These include personal characteristics of the farmer, such as age (Burton, 2014; Pereira, 2012), the level of education (Casewell et al., 2001; Ondersteijn et al., 2003;  Pereira, 2012), and the farmer’s overall “attitude” to the environment (Brannstrom, 2011; Defrancesco et al., 2008) or their preexisting “pro-environmental motivations” (Rueda et al., 2019). Other factors are related to the characteristics of the farm or the business and include the size of landholdings, the level of intensity of current production, whether the farmer has access to credit or capital, and the availability of off-farm income (Wossnik & van Wenum, 2003), which may affect the relative costs to the farmer of compliance. Finally, producers’ decisions may be affected by their social networks and the dissemination of information about environmental requirements, which could include alignment of other local institutions with the policy (Brannstrom, 2011), whether neighbors participate and if their participation is known (Defrancesco et al., 2008), and the ease of understanding and adapting to the policy requirements (Rausch & Gibbs, 2016; Wilson & Hart, 2001). Thus, there are many factors that may influence a rancher’s response to new requirements to cease deforestation, even when provided a compelling reason to change their land-use practices, such as maintaining market access under well-designed, well-implemented sourcing policies (Garrett et al., 2017; Ribot & Peluso, 2003; Rueda et al., 2019; Wollni & Brümmer, 2012).

In this article, we draw on a novel data set of 131 interviews with ranchers, plus additional interviews with slaughterhouse personnel and other key informants in the cattle sector, and secondary data to characterize cattle production in southeastern Pará. These surveys were conducted in 2013 and 2014, but they describe structural challenges that continue to be faced by ranchers as well as adaptations to land management and position in the supply chain that ranchers continue to use to avoid complying with the CA. The findings presented in this article point to potential adaptations to the CA that could lead to improved outcomes for both forests and ranchers.