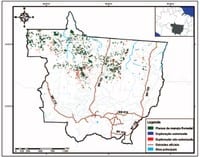 Read more about the logging situation in the State of Mato Grosso between the years 2009 and 2010.
In this bulletin Transparency in Forest Management in Mato Grosso we assess the logging situation in the State from August, 2009 to July, 2010. To do this, we utilized information from the control systems at Sema (State Environmental Secretariat) in Mato Grosso: Simlam (Integrated System for Environmental Licensing and Monitoring) and Sisflora (System for Commercialization and Transportation of Forest Products). That information was also crossed with information generated by Simex (System for Monitoring Timber Harvesting), developed by Imazon. We found that in 2010 the great majority (98%) of Autex (Authorization for Timber Harvesting – Autorização para Exploração Florestal) were regular, while the remaining 2% had some inconsistency, such as having the area authorized in a deforested area. When we compared the proportion of Autex with inconsistencies from 2009 to 2010, we observed a significant reduction in the cases of credit commercialized greater than that authorized.
The Analysis of satellite images revealed that approximately 226,047 hectares of forests were logged from August, 2009 to July, 2010. Of that total, 99,800 hectares (44%) were not authorized by Sema, as opposed to 126,247 hectares (56%) that were authorized. Of the non-authorized total, the majority (87.8%) occurred in private areas, or lands that are vacant or disputed; another 12.1% in Protected Areas; and 0.1% in land reform settlements. When compared to the previous period (August, 2008 to July, 2009), there was a reduction by 29% (52,945 hectares) in authorized logging, while non-authorized logging increased by 84% (45,684 hectares).
We also used satellite images to evaluate the quality of timber harvesting in the two periods analyzed. We verified that the areas with good quality logging fell from 12 thousand hectares to 7 thousand hectares; the areas with medium quality logging droppeded significantly from 94 thousand hectares to 38 thousand hectares; and the areas with low quality logging showed an increase of from 71 thousand hectares to 80 thousand hectares. Finally, we verified from satellite images that in 99% of the forest management areas evaluated from August, 2007 to July, 2010 the forest was maintained for the next cutting cycle, while there was deforestation (clear cutting) in only 1%.
Download the file here