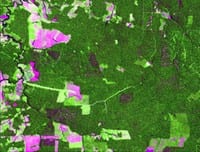 André Monteiro & Carlos Souza Jr.
Timber harvesting with forest management is selective, meaning that three to five trees are removed per hectare (<5%), leaving behind small clearings. Those clearings are generally considered difficult to detect using satellite images.However, studies at Imazon have demonstrated that it is possible to detect log harvesting and assess the quality of forest management by using such images. In this The State of the Amazon, we represent the results of an assessment of the quality of forest management plans in the centralwestern region of the Legal Amazon, using “good practice forest management indicators based on Landsat images. Of a total of 87 plans authorized in 2003 by Ibama for that region, the majority (54%) presented evidence of irregularities based on those images. Among the irregularities are: lack of signs of timber harvesting, logging carried out before authorization, logging followed by deforestation and area logged larger than the area declared in the plan. We suggest that the method be used in the licensing and monitoring process for private areas with and without forest certification and in areas under forest concession in the Amazon.
Baixe aqui o arquivo

Human Pressure in the Brazilian Amazon.The Amazon Frontier Advance: from boom to bust.