The Amazon Frontier Advance: from boom to bust. 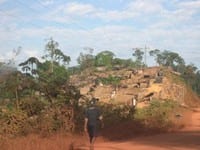 Celentano, D. & Veríssimo, A. 2007
The advance of the frontier in the Amazon has been marked by the degradation of natural resources, violence, and rapid economic growth, although this growth has been unsustainable in most municipalities in the region. In fact, in this model of land occupation, the economy follows a “boom-bust pattern. In the fi rst years of economic activity a rapid but ephemeral growth in income and employment occurs (boom), often followed by environmental, economic and social collapse.
The rates of rural confl icts and murders related to land disputes remain high, and are spatially correlated with deforestation and the opening of the frontier for agriculture, cattle ranching, and predatory logging. In turn, the HDI of the region (0.705) has increased in recent years, largely due to improved indicators for access to education. Even so, this index has remained below the Brazilian average. The municipalities with a higher contingent of migrants from southern and southeastern Brazil show a higher HDI compared to the rest, which provides evidence of an imported HDI.
Although the growth in GDP in the Amazon has outpaced the national average in recent years,it still represents only 8% of the Brazilian economy. Per capita GDP (US$ 2.32 thousand) grew only 1% per year in the last years in the Amazon, remaining 40% less than the Brazilian average. Furthermore, only 21% of the economically active population had formal jobs in 2004, with the majority being in the public sector.
An analysis of violence and socioeconomic aspects along different frontiers of occupation and deforestation in the Amazon (non-forested, deforested, under deforestation pressure, and forested) demonstrates that economic development in the region follows the boom-bust pattern as proposed by Schneider et al. (2000). In the short term, the economic indicators (GDP and employment) are rising and the HDI is favored by income generation and the attraction of immigrants. But the costs are high: violence, degradation of forests, and deforestation. In the long term, already highly deforested regions exhibit a decrease in rates of violence and lower socioeconomic indices compared to regions where deforestation is now occurring.
Baixe aqui o arquivo