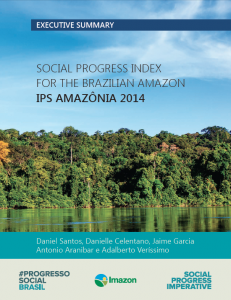 Santos, D., Celentano, D., Garcia, J., Aranibar, A., & Veríssimo, A. 2014. Social Progress Index for the Brazilian Amazon: IPS Amazônia 2014 (Executive Summary) (p. 16). Belém: Imazon and Social Progress Imperative.
The Brazilian Amazon is superlative in natural resources, harboring one-third of the world’s tropical forests and the planet’s largest hydrographic basin. Beneath this region lies one of Earth’s richest mineral deposits. Moreover, the Amazon forest retains vast amounts ofcarbon and plays a strategic role in the regulation of regional and global climate. Until recently, the Amazon’s social performance was assessed only by indexes which are themselves highly influenced by economic indicators. With the creation of the SocialProgress Index (SPI) methodology in 2013, it became possible to evaluate the region’s social progress by considering only the social and environmental indicators which are really key for people’s quality of life.
The SPI was originally proposed for the global scale and to measure social progress at thelevel of countries. However, since its launch in 2013, several national and sub-national initiatives have appeared. The IPS Amazônia seeks to answer the same questions as the global SPI and has the same statistical method. Nevertheless, some of the indicators used are different to better represent the reality of the region. For instance, indicators such as malaria incidence and deforestation rate are paramount for the Amazon, even though they are not so relevant for other areas of the globe. In order to calculate the IPS Amazônia, 43 indicators, recent and from reliable sources, have been used. The index ranges from 0 (worst) to 100 (best).
The report represents the most detailed diagnosis ever attempted of the social and environmental progress of the Amazon’s 772 municipalities and nine States. The data and results broken down to the municipality scale are available on the website www.ipsamazonia.org.br.
The Amazon has an IPS score (57.31) under the national average (67.73). In fact, the region yields results below the Brazilian average for all three dimensions and almost all components of the SPI. The best IPS result for the Amazon is in dimension 2 (Foundations of Wellbeing) with an average index score of 64.84, whereas dimension 1 (Basic Human Needs) shows intermediate results (58.75) and dimension 3 (Opportunity) has the worst performance in the region with a score of only 48.33. This last dimension also displays the greatest disparity between the region and the rest of the country (21%), making it clear that there is a lack of opportunity for the population of the Amazon.
Download the summary.
View the online version.
Read here the full report (in portuguese). An English-language version will be available online later this year.