The Brazilian Amazon and the Millenium Development Goals. 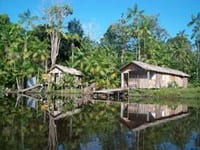 Celentano, D. & Veríssimo, A. 2007.
The Millenium Development Goals propose by the UN established targets and indicators to measure and guide improvement in socioeconomic (poverty, education, health, gender equality, maternal and infant mortality) and environmental conditions in poor and developing regions of the world. In this State of the Amazon, we evaluate the evolution of these goals in the context of the Brazilian Amazon. For this, we use 17 indicators to measure the progress of the region in relation to the targets proposed for the year 2015.
In the Amazon there has been progress in relation to the majority of the indicators analyzed when comparing its situation between the years 2005 and 1990. However, in general, this improvement is still unsatisfactory and the region remains below the national average. The situation is critical in the case of poverty, of the incidence of malaria, of maternal mortality and of access of the population to water and sewer service. Furthermore, two indicators worsened between 1990 and 2005: deforested area and cases of AIDS. Advances were weak in the search for gender equality. There is still a low rate of participation of women in politics and in the labor market. Besides this, women’s salaries continue to be lower than those of men.
On the other hand, access to education increased (although improving its quality remains a challenge), there is no inequality between the sexes in access to schools and there was a drop in infant mortality. Additionally, there was a considerable advance in the creation of protected areas (indigenous lands and Conservation Units), jumping from 8.5%, in 1990 to 42% in 2006.
In relation to the ten targets evaluated in this study, only one was reached in the Amazon (elimination of disparity between the sexes in access to education). Maintaining the slow pace of improvement, only two others could be achieved by 2015, as proposed by the UN: the guarantee of access to education and the reduction of infant mortality.
Baixe aqui o arquivo

The Amazon Frontier Advance: from boom to bust.The Expansion of Logging in the Brazilian Amazon.