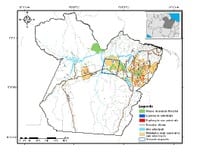 Monteiro, A., Cardoso, D., Conrado, D., Souza Jr., C & Veríssimo, A.
In this Forest Management Transparency in Pará bulletin we assess the timber harvesting in the State from August, 2008 to July, 2009. To do that we used information from the forest control systems at Sema (Pará State Environmental Secretariat – Secretaria de Estado de Meio Ambiente do Pará): Simlam (Integrated System for Environmental Licensing and Monitoring – Sistema Integrado de Licenciamento and Monitoramento Ambiental) and Sisflora (System for Marketing and Transporting of Forest Products – Sistema de Comercialização and Transporte de Produtos Florestais ). That information was also crossed with information generated by Simex (System for Monitoring Timber Harvesting developed by Imazon) within the Forest Management Support Program.
According to Simlam, forest production in the State of Pará in 2008 was approximately 3.5 million cubic meters of logwood and 4.4 million cubic meters of forest residues. In 2009, the State produced approximately 3.8 million cubic meters of logwood and 2.3 million cubic meters of forest residues. For both years, the great majority (98% in 2008 and 89% in 2009) of that production came from managed native forest and the remainder from managed plantation forest (2% in 2008 and 11% in 2009).
Analysis of satellite images revealed that approximately 128,500 hectares of forests were logged from August, 2008 to July, 2009. Of that total, 94,385 hectares (73%) were not authorized by Sema, as against 34,171 authorized hectares (27%). Of the non-authorized total, the majority (83%) occurred in private areas, vacant areas or lands in dispute; another 11% occurred in land reform settlements; and 6%, in Protected Areas. When compared to the previous period analyzed (August, 2007 to July, 2008), we observed a 75% reduction (278,209 hectares) in the area logged without authorization.
In the areas logged with authorization from Sema we evaluated the situation of the AUTEFs (Timber Harvesting Authorization- Autorizações de Exploração Florestal) and verified that the majority (91%) were regular. The remaining 9% presented some sort of inconsistency, such as management authorized for an already deforested area, management authorized for an area already logged, and area authorized greater than the total managed area. In comparing the proportion of AUTEFs with inconsistencies between 2008 and 2009, we observed a 76% reduction in the cases of areas authorized in deforested areas, of 53% in areas authorized in logged areas, of 53% in the cases of authorized areas larger than managed areas and 100% in those with credit sold greater than the amount authorized.
To evaluate the quality of forest management in the authorized areas, we selected 59 AUTEFs in whose areas it was possible to detect signs of logging in the satellite images. Analysis of images showed that in most (64%) of those areas was of medium quality; in another 14% quality was good; and only in 22% was logging of low quality. When we compared those results for the periods of August, 2007 to July, 2008 and August, 2008 to July, 2009 we observed that the areas with good quality logging dropped by 71% and those with medium and low quality increased 194% and 28%, respectively.
Finally, we verified in the satellite images from 2009 (August, 2008 to July, 2009) that in 97% of the forest management areas evaluated from August, 2007 to July, 2008 the forest was maintained, while there was deforestation in only 3%.
Download the file here