10 Essential Facts About Land Tenure Regularization in the Brazilian Amazon 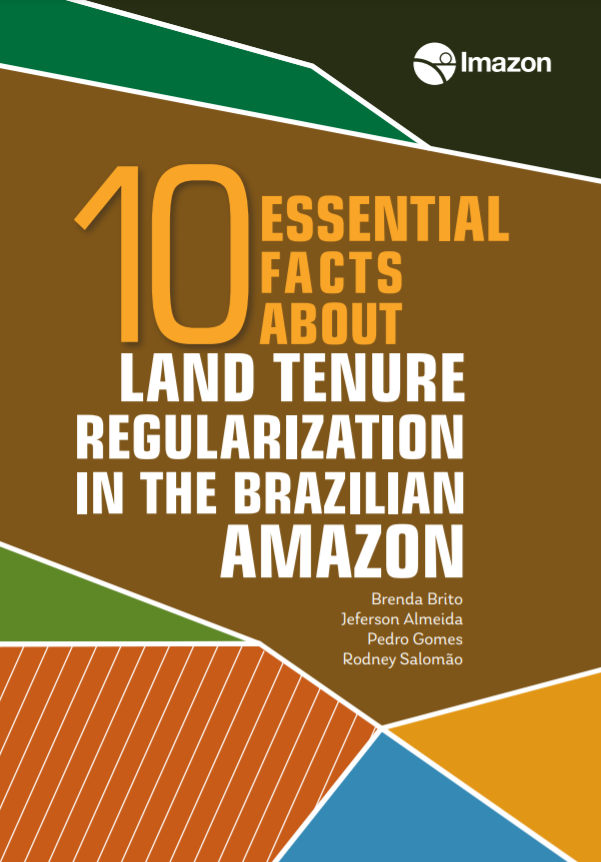 The significant increase in deforestation observed in 2018-2019, which exceeded 10,000 km² for the first time since 2008, shed light on the topic of land tenure regularization in the Amazon. Representatives of the federal government, states and the National Congress claim that the lack of land tenure regularization is one of the main causes for the loss of forests in the region. They also argue that it is necessary to issue a land title to those who deforest, so the government can identify those responsible for such environmental crimes and punish them. There was even an unsuccessful attempt to make the federal legislation on the subject more flexible in 2020. However, changes to federal rules related to land tenure regularization would be an insufficient measure and would stimulate new occupations of public land in the expectation of obtaining a title.

To discuss the problems related to land tenure regularization in the Amazon and possible solutions, we must learn some basic facts about the issue. For example, the federal government and states share responsibility for land tenure regularization in the Amazon. State governments are responsible for areas that have already been registered in the name of each state and for the undesignated areas outside the federal areas. The federal government, on the other hand, manage public lands that were registered as federal by the Federal Government. For this reason, the solution to the land tenure problem cannot be solved with a revision in the federal law, since each state has its own rules on the subject.

Furthermore, Brazilian legislation lists other priority means for recognizing land rights and designating public lands that are more effective in combating deforestation. One example is the recognition of Indigenous and Quilombola Territories[1] and the creation of Protected Areas. Titling private occupations on public land is only one of the existing options for land tenure regularization and the one with the lowest legal priority. There is also evidence that this practice of land privatization can lead to further destruction of the forest. This is because the land laws end up stimulating deforestation as proof of occupation to receive the title; or even because the title allows access to credit for expanding production, with associated deforestation[2].

In order to contribute to a more qualified discussion of this problem in the Amazon and to support solutions, this study makes a comparative assessment of state land tenure laws and practices in the Brazilian Amazon.

By practices, we mean how the governmental agencies implement the legislation. We also analyzed if these laws and practices at the federal and state levels are aligned with goals for reducing deforestation and recovering illegally deforested areas in rural properties; or whether they end up encouraging the continuation of the occupation of public land based on deforestation.

This study is the result of evaluations that we carried out between 2016 and 2020, in three stages:

I. Face-to-face interviews with representatives of state land tenure agencies and institutions working on the topic in all nine states of the Brazilian Amazon, held in 2016 and 2017.

II. Evaluation of state land tenure legislation in the nine states of the Brazilian Amazon, covering laws, decrees and administrative norms (such as normative rulings) approved as of 2020.

III. Survey of information from federal and state agencies on undesignated areas in the Amazon.

This publication highlights the most common problems we found regarding land laws and practices in the Amazon. We have also published nine separate reports detailing the assessment from each Amazon state. We present the results based on ten facts that incorporate the main findings of our analysis. They can be read sequentially or individually to facilitate the search for information of interest. The facts are:

• Fact 2: State governments are primarily responsible for the areas that lack land tenure definition in the Amazon, but there is an absence of planning for the control and designation of this territory.

• Fact 3: 43% of the territory lacking land tenure definition has priority for conservation, but current procedures do no guarantee the land designation for this purpose.

• Fact 4: There are at least 22 agencies tasked with some type of land tenure regularization in the Amazon.

• Fact 5: The lack of organization of land tenure databases and the low level of technology adoption makes it difficult to organize a single or shared land tenure registry.

• Fact 7: No state prohibits the titling of illegally deforested areas, and most do not require a commitment to recover environmental liabilities before titling.

• Fact 8: The Brazilian population subsidizes land privatization in the Amazon with no guarantee that the property will be used sustainably.

• Fact 9: There is a lack of transparency and social control over the privatization of public land assets.

• Fact 10: There were changes to seven land tenure laws in the Amazon between 2017 and 2020 to facilitate the privatization of public lands.