The Fragmentation of Space in the Amazon Basin: Emergent Road Networks 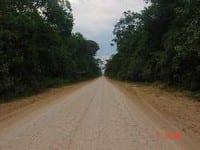 In this article, we simulate forest fragmentation patterns by reference to the actual decision-making of the agents engaged in the fragmentation process itself.
We take as our empirical case fragmentation in the Brazilian Amazon basin associated with road-building by loggers. Roads built by the private sector, particularly loggers, play a decisive role in the dynamics of frontier expansion in the Amazon.
Our objective is to explain the manner in which logging roads manifest spatially, thereby creating fragmented landscapes in a small portion of the so-called “Terra do Meio, a region of 300,000 km2 in the heart of the Amazon basin. We combine geostatistical methods with GIS to replicate a common fragmentation pattern found in tropical forests known as dendritic. Such fragmentation has been identified as one of the three most common types observed in the Amazon basin. The model replicates the general dendritic pattern and many branching points of the network, although segments do not overlay precisely. The paper concludes with a discussion of steps necessary to develop a model that is fully effective in describing the spatial decision-making of loggers.